Hundreds of University of Vermont students assembled in the main administration building Monday afternoon to push the school and its president, Tom Sullivan, to do more to address issues of racial justice and diversity of campus.

The demonstration was the latest in a series of protests at the UVM led by the group NoNames For Justice.

Protesters poured into the Waterman building, filling up the lobby, staircases and hallways. Organizers estimate that over 400 people turned out.

Standing on the second floor of the lobby, protesters led the group in shouting chants like ‘black lives matter,’ ‘students united, will never be divided’ and ‘Sullivan has got to go.’

Here’s a video from earlier this afternoon. Protesters at the Waterman building have in the building all afternoon waiting for further talks with @uvmvermont pres Tom Sullivan pic.twitter.com/fNc8hA438b— Liam Elder-Connors (@lseconnors) February 26, 2018

They declared they would continue to occupy the building until a scheduled meeting between the group's leaders and Sullivan, scheduled for Monday evening.

Among the groups demands are for UVM faculty and staff to go to annual diversity and inclusion training, increase "recruiting, hiring and retention of faculty of color and LGBTQIA," more funding for campus groups that focus on issues of identity and diversity and "adequate" responses to incidents of bias on campus.

Diana Allos, a senior and member of the UVM Womyn of Color coalition, said the school needs to see these changes a priority.

"Every time that we meet and ask for something and we’re told that it’s not possible," said Allos Monday. "It seems like the next day if we kick things up a notch, it’s suddenly possible. We know that things move through processes within institutions and we also know there are people within institutions who can accelerate these processes if they think that it’s a priority.”

A memo from Sullivan released on Monday outlined some steps the college is willing to take including hiring a recruiter to help the school diversify its faculty and doing more staff training around diversity. 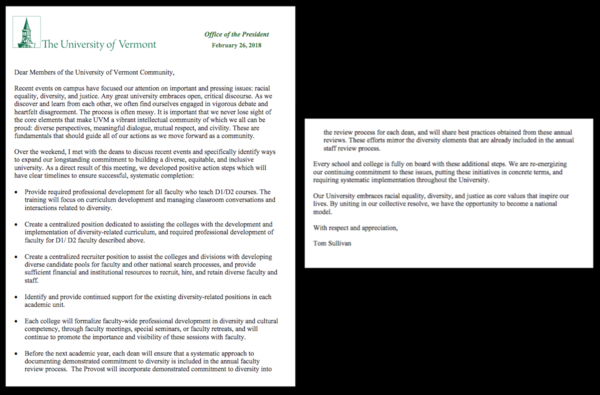 Doretha Benn, a second-year graduate student studying Higher Education and Student Affairs Administration, said the memo from the president addresses some issues — but Sullivan could be doing more:

Benn said at this point, the UVM administration needs to step up and address the issues NoNames ForJustice are bringing forward.

Leaders of NoNames For Justice met with Sullivan twice on Monday. A release from the Vice-President for Executive Operation Gary Derr said the meetings “largely involved good, constructive discussion’ and welcome further discussions with the group.

However, Derr said that they protests Monday were a “significant disruption’ and the university was “prepared to take all appropriate disciplinary and legal steps to address the situation should it continue.”

Update 2/27/2018 9:40 a.m. This story has been updated to include comment from the University of Vermont on yesterday's protests and meetings with NoNames for Justice.

Update 2/27/2018 9:58 a.m. This story has been updated to include an estimation of how many people attended the protest.

Three colleges around Burlington report that stickers and posters promoting white nationalist views were left on their campuses. The University of Vermont, St. Michael’s College and Champlain College have denounced  the signs and removed them.

It's been five years since the death of Trayvon Martin — and the outrage that sparked the Black Lives Matter movement.

An art professor just spent four days publicly painting a six-foot-tall portrait of Trayvon Martin, the black teen whose murder in 2012 polarized the country and ignited a debate on racial profiling and civil rights.