A Four-Year-Old Helps Her Mother Speak Out

Lin agreed. But immediately added a word about the value hard work and compassion. Her daughter's response was not what Lin was expecting.

"There are things that even more important than being smart…” I began.

“I know,” my daughter sighed, dramatically, “like being brave. Be brave!”

I was surprised by her answer, especially as I myself had not been feeling very brave lately. I've tried sharing certain thoughts since the election. But every time I've begun, the words stop.

As an author, I travel across the United States. I've met so many people. They've all greeted me warmly, and I've never doubted our interactions were genuine.

But post-election, I began to mistrust them. Were they fake? Was there a secret belief that I, as an Asian-American, shouldn't be here in this country?

My mother saw my distress and tried to comfort me. "Don't feel bad," she said. "If we're nice people who contribute something Americans need, we'll be welcomed."

She meant well. But this rankled. I am American. I was born and raised here. I can't even speak Chinese. My mother's an American, too. She’s lived more years here than in her "homeland." Why do we need to prove ourselves in order to be welcomed into our own country?

Never before have I been so insecure about my place in the world. An insidious whisper of doubt has been pervading almost every interaction I've had.

But then it dawned on me: This whisper -- this doubt -- is something I imagine black people in America have lived with their whole lives.

Many times I’ve bemoaned the burden of being an Asian-American writer. While other authors are asked about the creative process, I’m usually asked about diversity.

I've come to accept that answering those questions is a necessary responsibility. But now I realize it's also a privilege. Because I know people will listen when I say, "I'm angry that I'm no longer sure I'm welcome here."

Many others don't have the chance to be heard. Which is why I am speaking to you about this now. As my daughter says, "Be brave."

Grace Lin is the author and illustrator of more than a dozen children’s books, including the National Book Award finalist, “When the Sea Turned to Silver.” She lives in western Massachusetts. 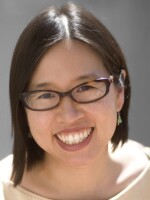