A Serendipitous Encounter With The Ghost Of A Once-Famous Belchertonian

A household name across the country, Josiah Gilbert Holland sold over a half-million copies of his books in his lifetime.

Born nearly 200 years ago in Belchertown, Massachusetts, Holland trained as a doctor. After failing at medicine and publishing, he taught school in Mississippi.

On his return to Massachusetts, the Springfield Republican hired him. He wrote essays, histories, novels, poetry. He eulogized Abraham Lincoln at his funeral in Illinois. Ten months later, he penned Lincoln's first biography, which became a best-seller.

Holland was friend to the poet who would become the Pioneer Valley’s far greater personality. What Emily Dickinson most admired about Josiah was, she said, that he was "so simple, so believing," and made God seem "so sunshiny."

Literary critics panned Holland for his mawkish moralistic sentimentality, but the public loved him.

“There is no royal road to anything, one thing at a time, all things in succession,” goes one of the many quips attributed to him. “That which grows fast, withers as rapidly. That which grows slowly, endures.”

A few weeks ago, I traveled to Springfield, Massachusetts, for a conference where I had some hours to spare. Rooting around for something to do, out of the blue, I recalled reading about a monument to the author in Springfield Cemetery.

Go around a hairpin curve and up a hill, and you’ll find it: an imposing pedestal more than 10 feet tall. Most striking is the bronze plaque, burnished green, created by the eminent sculptor of the era, Augustus Saint-Gaudens.

In Belchertown afterward, I passed Holland Glen, a little-known ravine with waterfalls a stone’s throw from Holland's impoverished beginnings.

A light shined down upon me. On the very anniversary of Holland's passing, this writer was called to him.

Holland, the most-forgotten, famous Belchertonian, suddenly and mysteriously had emerged from the dead and become, for a brief moment in time and to a single person, the most-remembered. 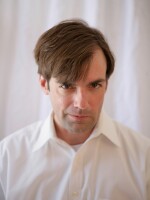 Michael Carolan
Michael Carolan was born in Kansas City, Missouri. His writing and reporting has been named notable in the Best American Essays series and has received prizes including from the Atlantic Monthly.
See stories by Michael Carolan
Watch Now
Related Content