Grateful For The Reprieve From Making Music Alone At Home

I agree with the creator and star of “Hamilton,” Lin-Manuel Miranda, who said performers are “like Tinker Bell in the play ‘Peter Pan.’ We need applause to live.”

I recently gave my first vocal concert in more than a year and a half. We weren’t certain, going in, whether it would need to take place outside the church in Charlemont, but fortunately, my pianist and I were able to perform indoors. I have a strong voice, but trucks and motorcycles drive by the church. I’m not sure I’m loud enough to compete.

The audience was masked, and we positioned ourselves 12 feet from the closest listeners. For one magical hour and a half we enjoyed the church’s excellent acoustics and a feeling of community.

Our program consisted of music we had hoped to perform throughout the lockdown, but could only practice in solitude in our homes. It alternated between peppy, comic songs and slow numbers. The evening was anchored by Stephen Foster’s “Hard Times Come Again No More.”

Foster wrote the song in 1854. He was having personal and career problems. His home city of Pittsburgh suffered the double blows of a recession and a cholera epidemic. Looming over all this was the unresolved issue of slavery, which would plunge the nation into civil war a few years later.

It was, in short, a time not unlike recent months. Foster’s lyrics urged comfortable Americans to pay attention to the woes around them.

Audience members responded to our show with laughter, tears and joy. I asked them to hum along through their masks during the last song, “Over the Rainbow.” They did so quietly, so quietly that I’m not sure I could actually hear them.

I could feel them, however. The room reverberated with what musical-theater icon Audra McDonald calls “the holy communion between a performer and her audience.” That feeling was almost better than applause, although happily we had plenty of that as well.

And like Lin-Manuel Miranda and Tinker Bell, we came to life.

Commentator Tinky Weisblat is a singer and writer who lives in Hawley, Massachusetts. 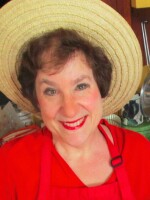