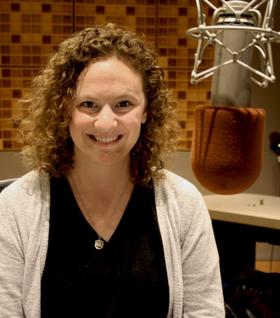 Annie Ropeik joined NHPR’s reporting team in 2017, following stints with public radio stations and collaborations across the country. She has reported everywhere from fishing boats, island villages and cargo terminals in Alaska, to cornfields, factories and Superfund sites in the Midwest.

Her work has appeared on NPR, the BBC and CNN, and earned recognition from PRNDI, the Delaware and Alaska Press Clubs and the Indiana Society of Professional Journalists.

Originally from Silver Spring, MD, Annie caught the public media bug during internships at NPR in Washington and WBUR in Boston. She studied classics at Boston University and enjoys a good PDF, the rule of threes and meeting other people’s dogs.

Activists are calling on electric customers in New Hampshire and New England to stop paying their utility bills on Sept. 1, in a strike that aims to put pressure on the regional energy system to address climate change.

No Coal, No Gas campaign volunteer Jeff Gang says the goal is to have a thousand people signed up to strike ahead of time.

Massachusetts recently announced that it was ending its pandemic moratorium on reusable shopping bags, saying towns could go back to reinforcing their bans on single-use plastic bags.

Meanwhile, New Hampshire and many other states are still not letting shoppers bring their reusable bags to stores. But is that actually helping to slow the spread of coronavirus?

Listen
Listening...
/
Listen to the broadcast version of this story.

New England saw a big drop in energy prices and demand in March, as the coronavirus pandemic coincided with mild late-winter weather.

The region's grid operator, ISO-New England, says March had the lowest electricity prices since 2003, when the current market structure began.

The regional grid runs mostly on natural gas, and gas prices were 60 percent lower in March of this year than last.

New England used more wind and solar power than ever last year, but fossil fuels still make up half the electricity generated in the region.

In new data, power grid operator ISO-New England says 49% of electricity generated in New England last year was from natural gas. Less than 1% was from coal or oil.

Natural gas use has roughly plateaued in the region in the past few years. It peaked in 2015.

Where They Stand: Comparing The 2020 Democrats' Climate Change Proposals

Throughout the presidential primary campaign, voters in New Hampshire have said climate change is one of their top priorities. And even as candidates emphasize the dangers of global warming – and detail their plans to address it – many voters aren't reassured.

NHPR’s Annie Ropeik has more as part of our series “Where They Stand,” which takes a closer look at candidates’ policy proposals.

Editor's note, Feb. 4, 2020: Click here to see an updated version of this project with the Democratic field as of the final week of the New Hampshire primary.

N.H. Squares Off With 3M In Court Fight Over New PFAS Water Standards

The major chemical company 3M and a group of local stakeholders want an injunction against the recently implemented rules.

3M's attorney laid out their arguments inside Merrimack Superior Court, as protesters outside denounced the involvement of the corporation that pioneered PFAS.

New Hampshire was hit with a lawsuit over its new limits on PFAS chemicals in drinking water on the same day the new regulation took effect.

The suit, filed in Merrimack Superior Court, comes from the Plymouth Village Water and Sewer District, a farmer in Center Harbor and a fertilizer company in Holderness, as well as 3M, the original maker of PFAS compounds.

Nearly 70 people were arrested during a protest at a coal-fired power plant in Bow Saturday.

The activists had marched onto the grounds of Merrimack Station, the largest coal-burning facility left in New England that is not set to retire.

Hundreds more people from across the region protested outside the plant’s main gate and in nearby Memorial Field, decrying the continued use of the fossil fuels that accelerate the harmful effects of climate change.

Listen
Listening...
/
Listen to the sounds of the protest in the broadcast version of this story.

Governor Chris Sununu signed two bills Tuesday banning the use of some products that contain harmful PFAS and other chemicals.

The industrial compounds have been linked to a wide array of health problems.

Eversource has officially pulled the plug on the Northern Pass transmission line.

The utility filed a notice with the federal Securities and Exchange Commission late Thursday, a spokesman says, “reflecting our conclusion that Northern Pass has unfortunately been brought to an end.”

The New Hampshire Supreme Court on Friday dealt what may be the final blow to the Northern Pass transmission line.

New Hampshire is at the forefront of a growing debate over PFAS chemical contamination in drinking water. And many of the Democrats campaigning to win the state’s first-in-the-nation presidential primary are taking notice.

They’re using the issue to connect with a highly engaged block of potential Granite State voters – and local PFAS activists are welcoming the attention.

Listen
Listening...
/
Listen to the broadcast version of this story.

State environmental officials on Friday proposed what would be some of the lowest limits in the country for four types of PFAS chemicals in public water supplies and groundwater.

Two of the big players on the Northeast's highest mountain - the Mount Washington Observatory and the Cog Railway – are taking each other to court.

At issue is a 2009 agreement that lets Cog riders visit the nonprofit Observatory's museum for free. In exchange, it says the Cog will pay the Observatory a dollar per visitor.

They'll Drink To That: The Presidential Hopefuls Pull Out The Brewery Stops in N.H.

There’s an old cliché in politics – who’s the candidate voters would want to have a beer with?

It’s a euphemism for likability. But this year, it’s also something New Hampshire voters might actually be able to answer.

'Ice-Out' Times A Harbinger of Spring, And Lake Health

Wednesday marked "ice-out" on Lake Winnipesaukee – the day when the cruise boat Mount Washington can safely reach all of its ports.

It's pretty standard timing for this traditional sign of spring. But overall, state records say New Hampshire lakes and ponds may be thawing earlier as temperatures warm.

It comes after an extra public hearing on concerns they were moving too quickly to approve the license extension through 2050.

Editor's note: After this story was posted Monday afternoon, Mount Washington recorded a peak wind gust of 171 miles per hour - the highest since 1985, and a new February record for the summit.

The original story continues below:

The Mount Washington Summit Observatory saw some of its highest winds in more than a decade Monday.

Meteorologist Tom Padham said the strong gusts, forecast up to 165 miles per hour, had been buffeting the 6,288-foot-elevation weather station all day.

The EPA says this plan is a broad roadmap of goals for protecting people from exposure to the huge class of likely toxic PFAS chemicals.

These industrial chemicals were used for decades to make non-stick, waterproof and stain-resistant coatings, as well as firefighting foams and other industrial products.

A Nuclear Regulatory Commission hearing on the issue Wednesday night was packed with industry workers and residents from New Hampshire and Massachusetts.

Energy can be tough to understand. When we flip a light switch, we know the lights should come on. But we might not know where that power came from – or why it costs what it costs.

In New England, much of those costs are controlled by a select group of stakeholders – called the New England Power Pool, or NEPOOL.

NEPOOL is now facing criticism for a lack of transparency, and for decisions that could be raising the already high cost of energy in the region.

Researchers at the University of New Hampshire have found a new way to make sustainable fuel out of sunlight.

The process is an artificial form of photosynthesis – where plants use sunlight to convert carbon dioxide into energy.

Here, researchers combined cobalt and urea – both cheap and abundant – to make a yellow material that absorbs sunlight.

That lets the material reduce carbon dioxide from the air into component parts that can be stored as a combustible liquid fuel.

The Trump administration has approved a first step toward offshore oil and gas drilling on the Atlantic coast.

Eversource has lost a bid to buy a major water company in Connecticut. Shareholders at Connecticut Water voted overwhelmingly Friday to merge with California-based SJW Group.

Eversource was competing with SJW to make the acquisition. The energy giant argued they'd offer more local control and a complementary service area.

A new report suggests New Hampshire's Seabrook Nuclear Power Plant will be essential to curbing the effects of climate change in the coming years.

Seabrook and Millstone Station in Connecticut will be the only two nuclear plants left in New England after next year.

They're also some of the most profitable nuclear plants in the country, according to the Union of Concerned Scientists.

Researchers have finished their largest study to date on how ticks and warming winters are hurting moose in Northern New England.

The data shows unprecedented death rates among moose calves -- more than 50 percent in four of the past five years, plus lower reproductive rates in adult moose across Maine, New Hampshire and Vermont.

The head of the Environmental Protection Agency in New England has been tapped to lead the agency's national Chemical Safety and Pollution Prevention office.

Alexandra Dunn is a long-time lawyer and environmental justice advocate who’s been the EPA's New England administrator for a little less than a year.

In this and other roles, she's worked with residents, industry and state officials in places like New Hampshire and Vermont to address chemical contamination in drinking water.

Report: Rural Residents In Northeast Spend High Percentage Of Their Income On Energy

A new study says rural residents in the Northeast spend more of their income on energy than almost anywhere else in the country.