Recipe For A Dream Vacation: A Croissant, Coffee And No U.S. News

What better way to escape winter in New England than to experience winter in Paris? Last month, I spent a week in the city of light -- well in January, make that "twilight."

Low airfares and hotel rates were alluring, and I could justify the trip by visiting an exhibition at Versailles, for which I had written an essay.

As I left Boston, news headlines -- the Globe, Times, CNN, even NPR -- were screaming "Trump, Trump, and more Trump," as usual.

I settled into the university district, and every morning I’d eat breakfast at La Crêperie on Rue Soufflot, named for the 18th-century architect.

Waiting for an omelet and croissant -- what else? -- I reached for the French newspapers that were scattered about the café: Le Monde, Le Figaro, Libération.

I looked at the first one with trepidation, expecting to read about the newest Trump insult, gaffe, international policy error… maybe nuclear war, too?

But non! There was nothing, or almost nothing.

One day, the first page of Le Monde centered on Brexit, refugees, the Middle East, and of course the threat of terrorism in France.

Everywhere, soldiers in fatigues and armed with automatic weapons could be seen making slow-motion sweeps down otherwise charming Parisian streets.

While I was there, a polite anti-Macron rally attracted 200 police and 20 armored vehicles.

In that newspaper that day, there wasn't a single mention of the U.S. or Trump on page 1, or page 2, or 3, or 4. Nothing. On page 8, finally, there was a half-page on something Trump said or did. That was it. Next to nothing on French television. A tidbit maybe, but no more.

No photos of Trump, either. Instead, it was Macron in a tailored suit. Why are Trump’s suits so baggy, I thought to myself.

I found the absence of emphasis on Trump to be an enormous relief. I'd escaped for a while from the inescapable.

And it was refreshing to know that the world goes about its own business, however complicated and distressing that may be.

So here’s my advice: airfares are still cheap to Europe, and though the dollar's tanked, you can still get an omelet, croissant, espresso and juice for six Euros. And all that comes without news of the U.S. Now that’s a vacation.

Paul Staiti teaches art history at Mt. Holyoke College in South Hadley, Massachusetts. His most recent book is "Of Arms and Artists: The American Revolution Through Painters’ Eyes." 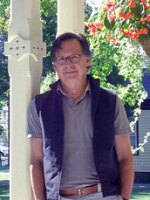 Paul Staiti
Paul Staiti, Alumnae Foundation Professor of Fine Arts at Mount Holyoke College, is the author of books and essays on John Singleton Copley, Gilbert Stuart, Samuel F. B. Morse, William Michael Harnett, and Winslow Homer. He has lectured at the Louvre, the Museum of Fine Arts Boston, and the Metropolitan Museum of Art, and has been the recipient of senior fellowships from the National Endowment for the Humanities three times. He lives in South Hadley.
See stories by Paul Staiti
Watch Now
Related Content