As of January 1 of this year, the copyrights of the authors of more than 50,000 works expired, meaning any of these works can be reproduced, distributed, performed or displayed without permission.

You can post the entirety of Robert Frost’s poem “Fire and Ice” on your personal blog. You can make a movie composed of scenes spliced from the silent film "The Ten Commandments." You can write a book whose epigraphs consist of Jelly Roll lyrics, or a television script based on P.G. Wodehouse’s "Jeeves."

If that’s not exciting to you, maybe it’s because you don’t think works published 96 years ago are worth borrowing.

I admit, I would rather write a high school musical composed of Bob Dylan lyrics than I would write a screenplay based on the musical "London Calling." Still, a survey of the publications includes some delightful material, from commentaries on the effectiveness of the “alcohol test” in determining the quality of cow’s milk to an early iteration of Virginia Woolf’s “Mrs. Dalloway.”

It’s not all dated or distant, either. Frost’s long poem “New Hampshire,” which was published and awarded the Pulitzer while he was teaching at Amherst, offers droll commentary on each New England state in a manner that feels positively contemporary — nay, Buzzfeedian.

Public Domain Day is exciting to me, I think, for a few reasons: the first is the novelty. It’s the first time in 20 years — the first time in my legal or writing career — that the public domain has ballooned. It’s a relief, as well as a novelty, to see a regime operating as it said it would. (Take note, public service loan forgiveness!)

Public Domain Day also has a liberating effect. It provides a clear cut-off point. It gives publishers and producers — and yes, even lawyers — a chance to say, “Yes,” instead of negotiating with an author’s estate or assessing the risk of a federal lawsuit. Borrowing from, riffing on, or using these works used to be a liability; now it’s a free-for-all.

Lauren Ostberg is a writer and intellectual property lawyer. She lives in Hadley, Massachusetts. 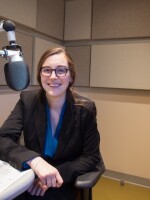 Lauren Ostberg
Lauren Ostberg is an attorney based in Springfield, Massachusetts, and resides in Hadley. She writes (and occasionally publishes) essays about whiskey, Star Trek, feminism, and other topics.
See stories by Lauren Ostberg
Watch Now
Related Content