During this pandemic, some cities have been said to be turning into ghost towns. I  wonder if they — and we — are instead being transformed into something else.

Once, when I was six, my dad told me we were going to a ghost town. I was expecting streets full of beings you could see through as they walked through walls, possibly wearing sheets poked with eye holes.

"Where are the ghosts?" I asked my mother, for the town was empty of people.

She explained that the town itself was a considered a ghost since stores had closed and most people had moved out. It happens sometimes. Places change.

Thinking back, I was expecting the town to be thriving. And in some ways it was, for the streets echoed with the metallic sound of gulls, sending shivers through the empty buildings. Maybe that’s what ghost towns are —places taking on new life.

I’ve had other encounters with ghosty sites. Once I lived on an island in the North Atlantic with a breeding population of storm petrels. Thousands nested in burrows underground and called out at night.

Crossing the island after twilight, the ground laughed at you — a deep chortle. Early shipwrecked sailors were scared out of their wits, thinking the island was haunted. And it was — by dusky gray birds that flew in and out only after dark.

Back in town, a different transformation had taken place. An old cheese factory had been razed except for the chimney which was left free-standing in a parking lot. At sunset we’d gather to watch chimney swifts return to their nests. They twisted like a DNA helix spinning into the abandoned chimney, turning it from a silent shaft into a loud call center. It was both breathtaking and breath-giving as the dead factory relic became alive again.

Recently it struck me that perhaps I too am turning into a sort of ghost town. Instead of teaching over seventy 20-year-olds face to face, I sit at home quietly teaching online. Most afternoons I go for long walks, alone with trees, alone with my thoughts, and the occasional blue jay. My life isn’t empty, just alive in a different way. 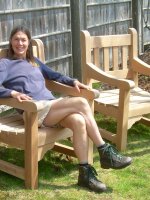